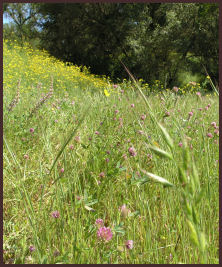 Alturas, the county seat sits at the intersection of Highway 299 and 395. We are located approximately 180 miles from Reno, Nevada, south on 395; 100 miles northeast of Redding, California, west on 299; and 100 miles from Klamath Falls, Oregon, north on 139. Despite high mountain passes (which are most beautiful to drive through) and inclement winters, the California Highway Departments keeps travel safe and accessible to and from Modoc County. You might see a hillside like this one in the spring. And as you drive into our valley from the west or the south you can’t help but notice one of our most beautiful landmarks: Saddleback Mountain in the South Warner Range JIC photo

A well known landmark in Alturas is the Elks Building. Originally the Nevada California Oregon Railway headquarters, the building was constructed about 1911, using stone quarried from the area. Many of the first buildElks Lodge Alturas Californiaings in Alturas were built with this stone. Now owned and used by the Alturas chapter, Benevolent Order of Elks, this building has offices on the first floor and hosts many community gatherings throughout the year. Lynda Demsher photo
Annual Balloon Fest Alturas California 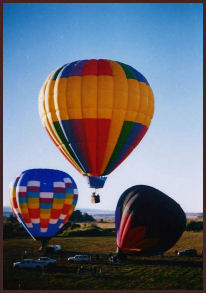 Since the 1980s Modoc County residents have looked forward to the annual Balloonfest, held late August or early September. A few moments after dawn the community wakes to the soft “whooshing” of hot air balloons filling. In a short while, the balloons go aloft. Dozens of balloons drift across the morning sky for an hour or two, carrying local passengers and delighting children. Should a balloon pass low across a field or land in one, the resident animals are excited–and curious. 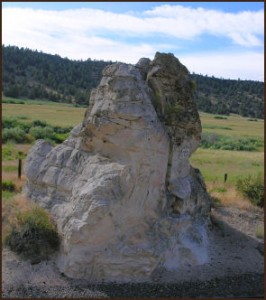 In 1860 Thomas Denson built a rough Chimney Rock, north of Alturas, once served as an actual chimney for a cabin built around it.ewn log cabin about seven miles north of Alturas, on the Pit River. He build the cabin around this pyramid shaped rock, cutting his fireplace from the rock itself. Denson, a master stone craftsman, carved his flue into the sandstone formation. The cabin has disappeared, but the rock has been preserved. Unfortunately, vandals have left graffiti on the stone. Felicity Photo